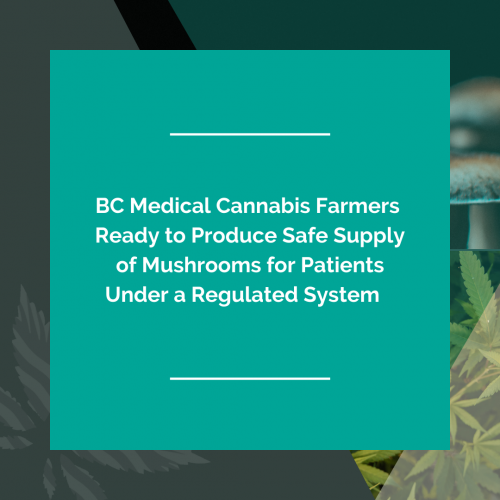 (Quw’utsun’/ Duncan, B.C.) – Participants at a craft cannabis roundtable, on Thursday June 16th in Duncan BC agreed that BC’s world-renown medical cannabis farmers are well-positioned to produce a safe supply of psilocybin (aka magic mushrooms) under a federal regulated system. TheraPsil presented an overview of draft regulations being proposed to the federal government. TheraPsil’s proposed regulations, modeled after the 2018 Cannabis Regulations, although proposed as regulations under the Controlled Drugs and Substances Act, are called the Access to Psilocybin for Medical Purposes Regulations. These regulations would move psilocybin and psilocin from the restricted drugs list to the controlled drugs list, allow prescribing medical professionals to authorize psilocybin access for patients, allow license holders to manufacture and sell psilocybin products to authorized patients or their physicians, and create a regulatory system for medical psilocybin access that can be used by physicians to suit the needs of patients, healthcare professionals, growers, cultivation and processing enterprises, and regulatory bodies.  Additional regulations accompanying the APMPR would exempt psilocybin products from the Food and Drugs Act, as is the case with cannabis products.

TheraPsil submitted these regulations to the former Minister of Health, Patty Hajdu, on August 4th, 2021, one year after Minister Hajdu approved the first four terminally-ill Canadians personal section 56(1) exemptions to use and possess psilocybin for medical purposes. Following a public consultation period and upon the appointment of the new Health Ministers, Jean-Yves Duclos and Carolyn Bennett, these draft regulations were updated and submitted to Minister’s Duclos and Bennett for consideration on November 16th, 2021.

Spencer Hawkswell, patient rights advocate and CEO of TheraPsil, had this to say:

“As the medical community’s interest in psilocybin continues to grow across Canada and around the world, there will be an increasing demand for a safe supply of psilocybin mushrooms, high quality treatment options, and training for healthcare professionals.  Vancouver Island is positioned very well to deliver both.”

BCCFC President Tara Kirkpatrick said, “In addition to creating hundreds of local jobs and tourism opportunities with the introduction of the province’s farm gate and on-site cannabis consumption policies and the federal review of the Cannabis Act, BC’s licenced medical farmers are ready to produce a safe supply of psilocybin under a regulated framework for people suffering from chronic disease and addictions to killer drugs like heroin, cocaine, fentanyl and methamphetamine.”

Currently, there are approximately 6,000 British Columbians authorized by Health Canada to produce cannabis for medical purposes.

Based on Vancouver Island, TheraPsil is a non-profit coalition of healthcare professionals, patients, and advocates dedicated to obtaining access to safe, effective, and legal psilocybin-assisted psychotherapy for Canadians. Over the past two years, TheraPsil has successfully advocated securing more than 80 exemptions from the federal Minister of Health for Canadians to legally possess psilocybin (aka magic mushrooms) for medical purposes.

The BC Craft Farmers Co-op (BCCFC) was founded in 2020 to provide B.C.’s small cannabis producers and processors with a safe, accessible, and sustainable alternative to the illicit market and ensure BC’s international reputation as an international cannabis leader and innovator is maintained. BCCFC members and supporters include BC craft farmers, processors, nurseries, labs, independent retailers, consumers, and sector vendors.