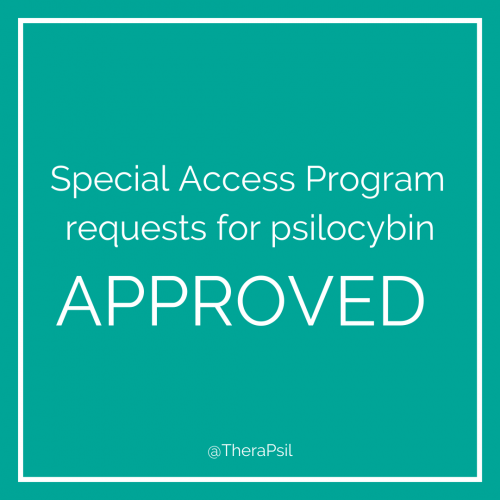 On March 21st, 2022, Dr. Valorie Masuda MD received authorization under the Special Access Program (SAP) to treat six patients experiencing end-of-life distress with psilocybin and psychotherapy. GMP synthetic psilocybin was donated by Psygen Labs Inc., and Apex Labs Ltd. provided access to its psilocybin investigators’ brochure, in support of the SAP application. This is the first known case of psilocybin being accessed through Canada’s SAP since the Food and Drug Regulations were amended on January 5th, 2022 to allow access to psilocybin and other restricted drugs through the SAP.  These six patients, along with one TheraPsil supported patient who recently received a section 56 exemption, were treated in early April of 2022 by Roots to Thrive, co-led by Dr. Masuda.

Some of the six patients were referred to Dr. Masuda by TheraPsil.  Dr. Masuda is an TheraPsil Associate physician and TheraPsil Board member. With pro bono legal support from David Wood PhD at R-Group Legal, Dr. Masuda prepared and filed these patients’ SAP requests after their section 56 exemptions for compassionate access to psilocybin were either denied, or went unanswered, by the Minister of Health Jean-Yves Duclos. Dr. Masuda describes:

One patient who was approved for SAP access, supported by Dr. Masuda and TheraPsil, is Thomas Hartle from Saskatoon Saskatchewan. Thomas Hartle was the first Canadian to access legal psilocybin-assisted psychotherapy in August 2020, after receiving one of the first four section 56 exemptions to legally use and possess psilocybin. Thomas re-applied for his section 56 exemption after it expired and has yet to hear back from Minister Duclos after waiting 176 days, to date. Now that Thomas has one-time access to synthetic psilocybin through the SAP he will be flying from Saskatoon to Vancouver Island for treatment.

Thomas Hartle had this to say:

“Getting access to this proven treatment through the SAP is bittersweet for me. I am grateful to receive the treatment. However, the vast majority of Canadians who need this therapy do not have access to the level of professional support that TheraPsil provided to me, and that played such a great role in my SAP application being approved. I hope that awareness of the extraordinary effort required will help highlight how challenging, if not impossible, the current system is for the majority of Canadians. Any process that requires weeks to complete cannot be considered a success for a terminally-ill individual. The SAP also does nothing to address ongoing treatment with psilocybin, again highlighting the need for regulated access to psilocybin.”

Patient rights advocate and TheraPsil CEO, Spencer Hawkswell, had this to say:

“This is a momentous occasion, the first legal access to a supply of GMP psilocybin in over 50 years. This is a major win for patients and doctors who have been left in the dark for the past 2 years with legal exemptions but no supply of psilocybin. Now that has changed and allowed for safe, Canadian made psilocybin to reach those who need it. There are thousands of patients and doctors on our waiting list eager to receive the same safe access and we look forward to helping them.

Patients who are in medical need of psilocybin and psilocybin-assisted psychotherapy are encouraged to learn more about pathways to access on TheraPsil’s website here.

Canadian prescribers who want to learn more about how to support patients in legally accessing psilocybin-assisted psychotherapy through the SAP are encouraged to email healthcare@therapsil.ca with the subject line “SAP Prescriber Inquiry”.

Individuals who would like to advocate for regulatory change and improved access to psilocybin for Canadians in medical need are encouraged to take action here and donate to TheraPsil, here.

TheraPsil is a Canadian non-profit organisation dedicated to advocating for patients in medical need of psilocybin and psilocybin-assisted psychotherapy. Learn more at therapsil.ca.