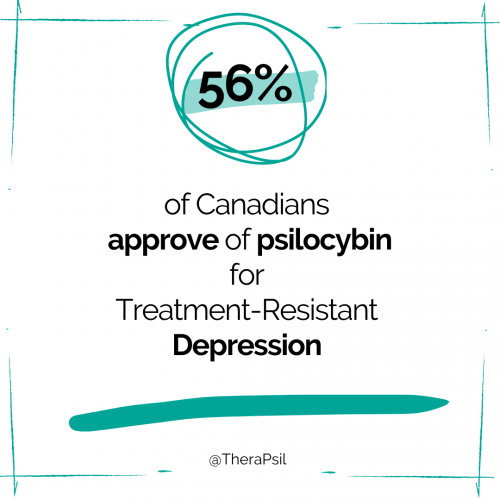 In a recent poll, commissioned by TheraPsil, from Pollara Strategic Insights, 56% of Canadians showed top-of-mind approval for legalizing psilocybin therapy for those suffering from treatment-resistant depression (TRD). Interestingly, in early November, Oregon legalized the first state-wide psilocybin therapy program, with 55.68% voting yes.  This insight also comes during a time when new research from Johns Hopkins University, indicates that “psilocybin-assisted therapy was efficacious in producing large, rapid, and sustained antidepressant effects in patients with major depressive disorder.”  In addition, TheraPsil recently announced that Minister Patty Hajdu also approved the first non-palliative Canadian access to psilocybin therapy by way of a section 56 exemption. The message is clear: The Canadian public is ready to advance psilocybin therapy as a treatment option beyond end-of-life issues for those suffering from other mental health conditions such as treatment-resistant depression. As Canada continues to struggle with a mental health crisis, TheraPsil urges Minister Hajdu to consider changes to the Canadian Drugs & Substances Act which would legalize psilocybin therapy through a doctor-as-gatekeeper model, to ensure that psilocybin therapy is made available for all Canadians in medical need.

On August 4th 2020, Canada made history and international headlines when Federal Health Minister, Patty Hajdu, approved four Canadians, suffering from end-of-life distress, the right to use psilocybin for medical purposes.

Psilocybin, the active compound in ‘magic mushrooms’ can be found in dozens of mushroom varieties, and has been a controlled substance in Canada since 1974, despite mounting research from leading institutions such as Johns Hopkins University which shows that psilocybin therapy can be a safe and effective treatment option for end-of-life distress, cancer-related anxiety and most recently, major depressive disorder, among other conditions.

Following this precedent-setting decision on August 4th, 2020, TheraPsil has received an overwhelming amount of requests from patients who may benefit from psilocybin therapy and who are requesting support for their own section 56 exemptions. Not surprisingly, a portion of these inquiries come from patients who are not terminally-ill, but who are suffering from a wide range of mental health conditions including anxiety, post-traumatic stress disorder (PTSD), addictions, and treatment-resistant depression.

At the time of this report’s publishing, TheraPsil’s inclusion criteria is narrow – focusing on supporting individuals with end-of-life distress as a result of a current or past life-threatening diagnosis. However, as psilocybin therapy continues to be sought after by patients across Canada for various medical needs, we were eager to ascertain the general public’s opinion about this treatment option for symptoms other than end-of-life distress:

Would Canadians generally be accepting of this alternative, effective option for conditions other than end-of-life distress ? If given the option to vote on legalizing psilocybin therapy for other conditions, including treatment-resistant depression, what would the public decide? Are Canadians ready to open their hearts and minds to this option, especially during a time when our country is facing a serious and growing mental health and addictions crisis?

In June 2020, two months prior to the historic August 4th decision, TheraPsil commissioned Pollara, a leading Canadian polling company, to determine public opinion and support of legalizing psilocybin for the terminally ill. The results of this poll showed:

This poll was encouraging and highlighted the importance of public education, one element of TheraPsil’s four-pillar-mission, and something that TheraPsil encourages private, public, and government organizations to expand upon.

What our first Pollara poll revealed is that a national dialog on “psychedelic therapy” was underway, and achieving significant momentum. This dialog is now further validated by Oregon’s recent passing of Measure 109 which is now the first state-wide legal psilocybin therapy program expected to roll out over the next two years.

In October 2020, two months after the government began granting access to psilocybin for patients suffering from end-of-life distress (on a case-by-case basis), TheraPsil commissioned a similar poll with two main objectives:

In the ‘October’ poll, top-of-mind approval for legalizing psilocybin for the terminally ill showed that:

When provided with additional information on the research regarding psilocybin’s medical potential and the Minister’s August 4th decision:

When respondents were asked to consider legalizing psilocybin for those with treatment-resistant depression (top-of-mind approval) the poll showed:

Comparing the October Poll to the June Poll

NOTE: In June, we looked at “acceptance” or expressed + tacit approval which was calculated by combining approval and ambivalence, as the those who are ambivalent largely display more positive than negative views – and if forced to make a choice between approval and disapproval, those who are ambivalent would likely choose approval over disapproval as seen in some of our other surveys. But this time, we did not include an “ambivalent” option – thus forcing respondents to make a clear decision. Therefore, here we are comparing “approval” in the October results with “acceptance” from the June results.

This poll was commissioned by TheraPsil from Pollara Strategic Insights.

This study was conducted with an online sample of 1,515 adult Canadians from October 2nd to 4th, 2020. Results from a probability sample of this size could be considered accurate to within ±2.5 percentage points, 19 times out of 20. Results have been weighted based on age, gender and region to be representative of all adult Canadians.

The exact wording of the questions asked can be seen in the appendix section, below.

It is encouraging that the Canadian public continues to show sustained support for legalizing psilocybin for those with a terminal illness. Minister Hajdu has now granted 13 Canadians access to psilocybin by way of section 56 exemptions. One of these individuals, Mona Strelaeff, is the first non-palliative Canadian to be granted access, indicating the Health Minister & Government’s willingness to expand access beyond end-of-life care.

We were very pleased to discover that 56% of Canadians either somewhat or strongly approve of legalizing psilocybin for treatment-resistant depression. As mentioned earlier, this is almost identical to the approval rate/voting numbers seen in Oregon for legalizing psilocybin therapy in the first-ever state-wide program (55.7%). Furthermore, Minister Hajdu recently approved the first non-palliative Canadian access to psilocybin, showing her / the government’s willingness to support patients in distress regardless of their life expectancy.

The support for new treatment options is critical at a time when Canada is facing a growing mental health and addictions crisis. A report by the Canadian Mental Health Association, states that “In any given year, 1 in 5 people in Canada will personally experience a mental health problem or illness” and “approximately 8% of adults will experience major depression at some time in their lives.” Typical treatment options for Canadians facing depression include pharmaceuticals, such as SSRIs, and psychotherapy. However, for individuals with treatment-resistant depression, these typical treatments do not work. Canadians with TRD suffer, and have nowhere to turn.

However, past research into psilocybin therapy has revealed it could be an effective option for those suffering from TRD.

What Does This Mean for the Future of Psilocybin Therapy in Canada?

Canadians are ready to accept psilocybin therapy, not only for those with a terminal illness but also for those suffering from treatment-resistant depression.

As more Canadians contact TheraPsil for support, it is clear more resources are needed to support the potentially thousands of individuals who could benefit from psilocybin therapy. Therapists across the country need to be trained in this unique modality, including experiential learning using psilocybin themselves. A legal Canada-wide psilocybin therapy program needs to exist.

TheraPsil urges Minister Hajdu to consider changes to the Canadian Drugs & Substances Act which would legalize psilocybin therapy through a doctor-as-gatekeeper model, to ensure psilocybin therapy is made available for all Canadians in medical need.

Overall, do you approve or disapprove of the federal government… – RANDOMIZE ORDER to avoid ordering bias]

Some terminally ill Canadians have been asking the federal government for access to psilocybin mushrooms. They argue that since Canadian law gives terminally ill patients the right to die with medical assistance, they should also give them the right to try psilocybin in an effort to improve their quality of life.

As you may know, the federal Minister of Health recently approved the use of psilocybin mushrooms for 6 terminally ill cancer patients to ease their end-of-life distress.

Thinking about this… Overall, do you approve or disapprove of the federal government legalizing psilocybin mushrooms for medicinal use by people who are suffering from a terminal illness, such as terminal cancer?