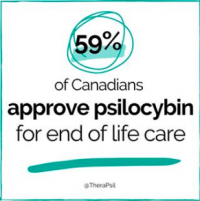 The poll was conducted with an online sample of over 1500 Canadian adults over 2 days in June 2020, and the results have been weighted based on age, gender and region to be representative of all adult Canadians.

How much resistance is there among Canadians that a natural plant  -  one the government considers to be extremely dangerous -  should be available to terminally ill patients?

This question has already been answered by the Canadian government, in its refusal to decriminalize therapeutic Psilocybin or even allow terminally-ill Canadians access to it. But the government - and particularly Health Minister Patty Hajdu - would be well served to have a close look at a new scientific poll from Pollara Strategic Insights that we at TheraPsil have commissioned.

Our new “ShroomPoll” shows 59% of Canadians, when informed, accept legal access to Psilocybin for end-of-life distress- and we’re couriering a copy of the full results to Health Minister Patty Hajdu

Here are the bare numbers:

Un-aided or top-of-mind approval for legalizing psilocybin mushrooms for terminally-ill Canadians is 41%. However, 64% majority show “acceptance”, once those who expressed “ambivalence” were included.*  One-in-four disapproves (23%).

After providing them with the additional information, approval significantly increases to 59% (+18 points) and 78% when "ambivalent'' respondents are added.

The significance of these results is pretty clear: When originally presented with bare information on psilocybin for end-of-life care, the response is 41% acceptance (‘top of mind support’’), still a very high number for a substance that has been considered to be a dangerous street drug. However, when the survey respondents were presented with a briefing based on impeccable new research,  their approval jumped +18 points, a significant increase, bringing acceptance up to 59% (informed support).

Pollara Strategic Insights says however, that it is generally accepted that those who express ambivalence usually sway towards acceptance when asked to make a decisive for-or-against position.

This is promising, highlighting the importance of public education, one of TheraPsil’s four-pillar-mission, and something that TheraPsil encourages private, public, and government organizations to consider expanding upon.

The Conversation has begun.

What this thorough Pollara poll reveals is that a national dialog on “psychedelic therapy”  is underway, and has achieved significant momentum. This is seen in the increasing number of individual patients asking for access to mushrooms, such as Saskatoon resident Thomas Hartle as seen in this CTV news story.

Here is a snapshot of Google Search Canada for the term, “Psilocybin”  between January and March 2020. This data is four months old… and undoubtedly growing.

Evidence on the effectiveness of psilocybin is now out in the open and in the public's hands. Here are just a few published studies:

People are questioning, all on their own: “What’s wrong with giving a dying person a mushroom, and the chance to make the transition with an open, caring and calm heart?”  The government must be listening.

Our new poll results are good, but there’s a lot of work left to do.

The Pollara poll  did find significant support for increased access to these “magic mushrooms.” But looking more closely at the numbers - and important disparities emerge. For example, although it’s true that 59% of Canadians strongly or somewhat approved medicinal use for terminally-ill patients, when informed, 21% either strongly disapproved or were uncertain.  Yes - the spread looks impressive but there still seems to be a need for further education.

This study was conducted with an online sample of 1,509 adult Canadians on June 12th and 13th, 2020. Results from a probability sample of this size could be considered accurate to within ±2.5 percentage points, 19 times out of 20. Results have been weighted based on age, gender and region to be representative of all adult Canadians.

Pollera calculate’s acceptance scores by combining approval and ambivalence, as the ambivalents largely display more positive than negative views – and if forced to make a choice between approval and disapproval, those who are ambivalent would likely choose approval over disapproval as seen in some of Pollera’s other surveys.

When respondents to the poll were reminded that “the sale and use of psilocybin mushrooms – also known as magic mushrooms, psychedelic mushrooms, or shrooms – is currently illegal in Canada” - and then asked,

Overall, do you approve or disapprove of the federal government legalizing psilocybin mushrooms for medicinal use by people who are suffering from a terminal illness, such as terminal cancer?

Their response was a solid 41% strongly or somewhat agreeing, while disapprovals came in at 23%.

But when a follow-up question was asked, prefaced by this incontrovertible information:

“Recent clinical studies have shown that psilocybin – the psychedelic compound found in magic mushrooms –  has helped treat end-of-life distress for terminally ill patients….”,  positive response increased a very large 18%.  Total “acceptance” - when you include the responses of people who were ambivalent about the issue are added in by Pollara - the number jumps to 78%.

Percentage of Canadians who accept legal access to Psilocybin for end-of-life care, once ‘ambivalence’ is included

Bottom line conclusion: Canadians are more than ready to have serious conversations about therapeutic Psilocybin available for people who have terminal illnesses. And we invite Patty Hajdu to join a majority of Canadians, and make this happen.

“My Patient has been waiting an excess of 8 weeks for a response from the Hon. Health Minister. This is unacceptable. No dying Canadian should have to reach to the highest levels of government to ask for legal access to a mushroom, just to be ignored. Patients have the right to die in Canada, so surely we must be able to give them the right to try a plant-based medicine that has been proven with clinical research to be a safe and effective treatment option.” - Dr Crosbie Watler, MD

WHAT YOU CAN DO

TheraPsil is a coalition of highly motivated campaigners, and educators, with a roster of professionals in a core segment of Canada’s healthcare community, and supporters across Canada. There are even elected officials who are onside, or getting off the fence.

Please consider lending your passion and energy to our totally not-for-profit campaign. We are a government-registered organization, led by a board of directors whose main objective is healing, and not making money.

The research is compelling. Doctors, psychologists, and other qualified clinicians are eager to get started. But there is a roadblock -  the Canadian government, and specifically, one key official, The Hon. Patty Hajdu, Minister of Health,  who has sole authority to approve exemptions to the current law that prohibits therapeutic Psilocybin.

Sign up for our newsletter at our website. Retweet our tweets, and get the message out to The Hon. Patty Hajdu, Minister of Health:  Patty, We Need Your Help.

Please have a look at the data. If you want to look at the actual results, please contact TheraPsil’s Executive Director, Spencer Hawkswell.

info@therapsil.ca
Newsletter:
We use cookies to ensure that we give you the best experience on our website. If you continue to use this site we will assume that you are happy with it.Ok