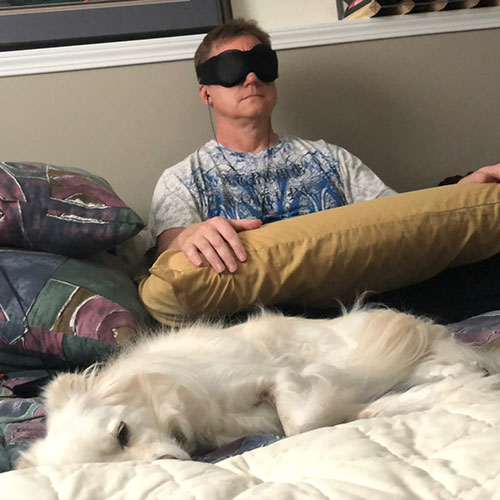 “When I think about things that only 4 days ago were impossible for me to talk about, I now find I’m a lot more comfortable with those same thoughts….my feelings around death are very different then they were” – Thomas Hartle (Cancer patient)

Settling into his space, in the darkness of his eye coverings and the felt vibrations of the instrumental music that echo through his headset, Thomas Hartle took a 6 hour journey that nobody could have prepared him for, “It was nothing like people described to me, it was very different”, Hartle shares.

“As I listened to the music, every instrumental piece seemed to create a different Universe… and out of all of the Universes I experienced, this is the only one where pain and suffering existed….my transition from this life to whatever the next place might be, is not so scary” 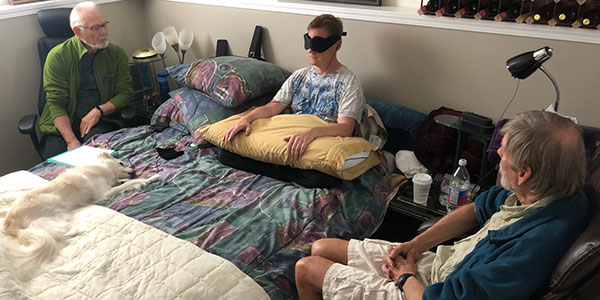 During his 6 hour journey, he experienced transformational ways of thinking that he previously was not certain were possible. How a mushroom can have such a profound effect on our sense of perception, is so incredible to conceptualize even for Hartle,

“Having Cancer is like being dragged behind a horse, it is terrifying and out of your control. How I feel now is a little closer to riding a horse, as opposed to being dragged by it. We are still on the horse and we are still going places but it’s not so out of control…to experience the lack of anxiety is beyond words, it is amazing.”

It was April of 2016 when Hartle learned of his rare form of stage 4 Colon Cancer. Although he struggled with his diagnosis, he successfully brought his Cancer into remission and remained free of it’s hold for 2.5 years while he continued with his normal work and family life. In August of 2019, his entire world as he knew it, was taken by storm. His Cancer had returned, expressing itself as 40+ tumours that lived on the inside of his Colon. This discovery took him and his family by surprise because the cancer was undetectable on scans, yet was actually far more severe than they could have imagined. Doctors warned him that at any given moment, one of his multiple tumours could rupture, causing fatal intestinal bleeding and leading him to death. For the 52 year old father who cares for his 2 special needs children, alongside his wife of 25 years, this was a reality that rocked him to the core.

“I worry about not being there for my family…the anxiety feels like dying before dying”.

How do you find comfort in living each day, in the face of your own mortality at any given time? How do you spend quality moments with family and enjoy dinners after chemotherapy treatments that leave you nauseated and completely exhausted? When your entire world becomes about the illness, a game of dodging death and no longer about laughing with your children, where is the joy in that? “There is Dread of what comes next, not knowing what is next,” Hartle expresses. 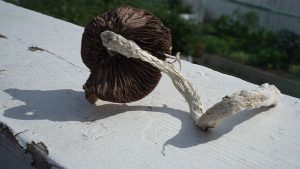 So as life was slowly slipping away from him, one moment at a time, he sought after a deeper knowing and an inner peace. “I wanted to understand and experience things that others have expressed, such as that the nature of the universe is love, and that everything is connected or that the concept of death is ridiculous.” Theories he had read about, yet felt so abstract and distant in his current state of suffering. Hartle was searching for something that would allow him to Focus his energy on “trying to live, instead of trying to die”. With so many present moments still to enjoy, how does one find calm amongst the Cancer storm? 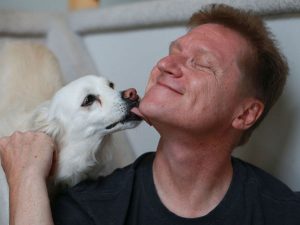 “It was the most peaceful I have felt in months, since my recurrence..everything about the experience felt very welcoming and kind,” he openly shares with me over the phone and soon the world.
After a long drawn out battle he finally gained legal access to use Psilocybin-Therapy, which has proven in studies to be extremely effective, in the treatment of anxiety and depression for Cancer patients.

“Psilocybin produced immediate, substantial, and sustained improvements in anxiety and depression and led to decreases in cancer-related demoralization and hopelessness, improved spiritual well being, and increased quality of life.” – Ross et al. 2016

The moment Hartle typed in “anxiety” and “Cancer in his search bar, was the moment that he would discover a treatment that would offer him refuge from the daily panic attacks that held him captive from his own living. Finding peace in the midst of chaos is more than he could have ever asked for, “I find that I am able to focus on being in the now and I feel very comfortable taking things as they come,” a way of being with his Cancer that is very foreign to him.

As I take notes about his personal experience, watching the raw video diaries he so vulnerability shared with me, it is beautiful to see his eyes light up as he talks about his new daily experiences of “feeling positive” and “anxiety free”. To think that it was only days ago that Hartle struggled to find solace in his days and now moves with ease while living with Cancer, is nothing short of miraculous. “Every part of this was completely worthwhile…I got answers to the questions I didn’t even know I needed to ask.” 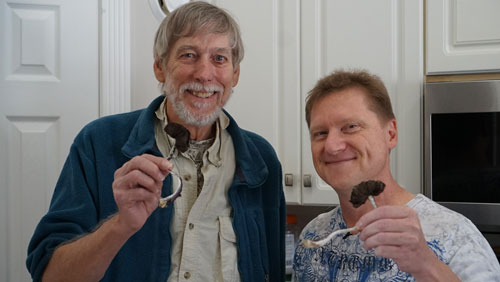 Spirituality is not something that conventional physicians like to talk about because they are struggling with it as well. The source of human distress is not only about feeling disconnected from the world around us but also being disconnected from ourselves, Dr. Walter Crosbie, a practising Psychiatrist explains. “When we can connect with our authentic selves above the cloud of the ‘monkey mind’…when we have the experience of a different level of consciousness and see ourselves through a different lens”, this is when the true healing happens. The experience of a Psilocybin journey for Hartle was nothing short of spiritual, “there is no other way to describe it”, he shares.

So as history is made and Thomas Hartle becomes the first Canadian to gain legal access to Psilocybin-therapy, his publicly shared journey is nothing short of phenomenal. It is on this day that we begin the unraveling of psychology as we know it and move into a renaissance of true spiritual connection and authentic healing, one patient at a time.